I received a strange email from Amazon.  It invited me, ‘when I’ve finished with this book’, to trade in Fighting for Birds by Mark Avery for an Amazon gift card.  Fighting for Birds isn’t a book I shall finish with, I shall want to keep it by me.  So I’m ignoring Amazon’s email.

But it did remind me that I had not fulfilled my promise to mention Fighting for Birds on this blog.  It has now been out for a year and much good stuff has been written about it.  Essentially it is Mark’s life story, focusing in particular on his 25 years with RSPB, full of events and experiences, anecdotes and useful tips, garnished with well-expressed, trenchant views with which I have much sympathy.  It really is a good read, though somewhat repetitive at times. 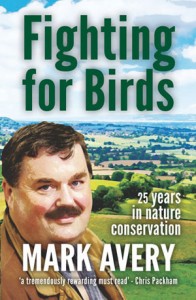 Returning to the book after some weeks I see that I noted in the back some random points which particularly appealed to me or struck a chord:

On peat extraction: ‘let sleeping bogs lie’ is certainly a good maxim for ensuring the bogs’ stored carbon remains in the soil and isn’t squittered into the atmosphere.

The campaign at the turn of the century against the fourth London airport on the North Kent marshes and friends Gill Moore and Joan Darwell telling Mark that ‘they had not really known or appreciated the wildlife riches on their doorstep until they were potentially to be lost’.  How often I find this to be the case when helping Open Spaces Society members save their spaces.

The walk round Dinas, in the Afon Tywi valley in spring, through oakwoods accompanied by the song of wood warblers: ‘I always walk clockwise around this route—for some unknown reason it seems right that way around’.  This made me think of my regular circular walks and how I prefer to walk them in a particular direction.

The swifts which nest at Abernethy in the Cairngorms, not where one might think of swifts nesting, but then, says Mark, ‘swifts belong in places like Abernethy—where else did they nest, before buildings, other than in ancient woodland?  The handful of swifts nesting in the ancient pines of Abernethy seem to me to be a stamp of approval on the place, verifying its primordial nature and its high value’.

And his advice on being a member of a government panel and how to gain influence, with which I fully concur.

So thank you Mark for a thought-provoking, amusing and fascinating book—which I shall not be trading in. 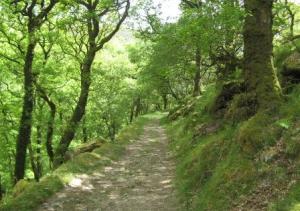 White Wood below Bench Tor, Dartmoor, where I heard wood warblers on 28 May 2010

I am the general secretary of the Open Spaces Society and I campaign for public access, paths and open spaces in town and country.
View all posts by campaignerkate →
This entry was posted in Birds, green spaces, Natural history, Open Spaces Society, Uncategorized and tagged Birds. Bookmark the permalink.