The boundary between heaven and earth

The fifth station on Mount Fuji (Tenchinosakai) is said to be ‘the boundary between heaven and earth’.  It’s a shame that it has been so abused.  This is where the vehicular road ends, and the site is dominated by a large sprawling car-park and ersatz Alpine buildings containing cafés, shops and post office.  Commercialism is rife at this sacred spot.  Mercifully it is hidden from the distant view by the topography. 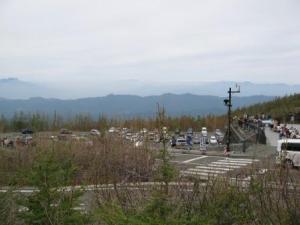 The fifth station, a massive car-park

The symmetrical shape of Mount Fuji, or Fujisan, is pleasing to the eye; despite its volcanic history it looks calm and restful.  At a height of 3,776 metres, Japan’s highest mountain, it dominates the landscape of Fujiyoshida, where I attended the international commons conference. 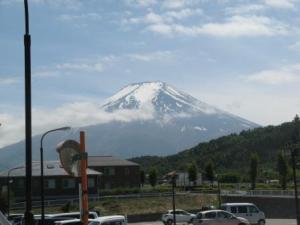 A visit to Fujiyoshida can be like a visit to Skye: you can stay there for a fortnight and never see the mountain.  We were lucky.  Although on our arrival there was nothing to be seen through the mist, the next day we emerged from a meeting at Fuji Calm hotel to find the whole mountain top had come into sight. 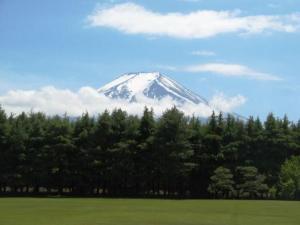 Even when you can’t see it, you are aware of it: on traffic-light gantries, drain covers, calendars and every postcard, advertisements—everywhere. 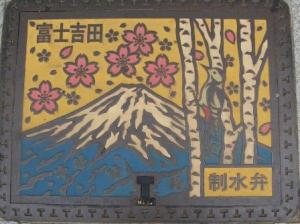 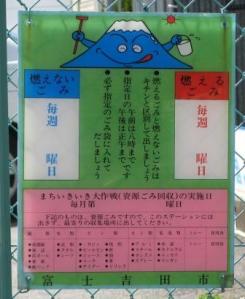 Fujisan is of course a sacred mountain, the emblem of Japan.  It’s a volcano which has had three main eruptions: 800-802 Enryaku; 864-866 Jogan; 1707 Houei, and many smaller ones.  Comfortingly the current eruption warning-level is 1 (normal).

People have walked up Mount Fuji for centuries.  The Fuji-ko are the pilgrims who climbed the mountain for religious reasons.  In the late nineteenth century the prohibition on women climbing the mountain was lifted.  The mountain is only officially open for climbing from 30 June to 26 August and now large groups go up there, totalling 300,000 people a year.  The pilgrims used to stay at Oshihouses at the foot of the mountain, where they were looked after before they set off.   In 1814 there were 86 Oshi houses in the Kami-yoshida part of Fujiyoshida, now there are only about 12.  The Fuji-ko wore straw sandals and light clothes which seem impossible today. 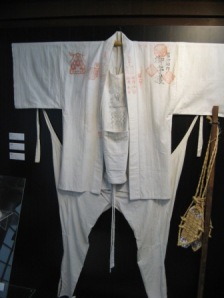 The yoshida trail starts at the Kanadorii gate in the town which marks the boundary between the sacred and the normal world.  On the way they visited the Kitaguchihongu Fuji Sengen shrine, a peaceful spot in the woods, before starting the climb. 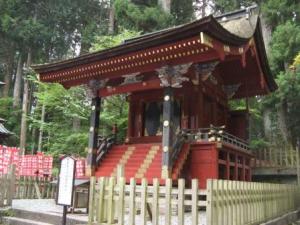 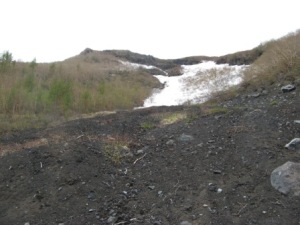 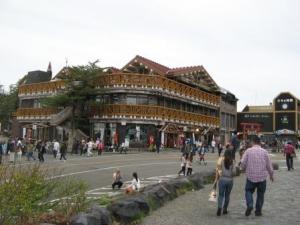 and walked to the sixth (2,390 metres), which is at the boundary of the wood and burnt mountains.  (There are ten stations in all.)  The rock is black lava and the birch trees are bent by the wind.  On a Saturday there was a steady stream of walkers on the well-marked trail, despite the fact that the mountain was not yet officially open. 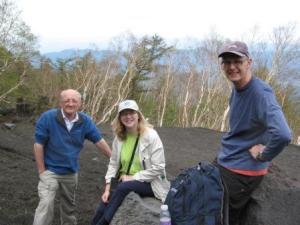 A disadvantage is that the mountain is divided between Shizuoka and Yamanashi prefectures (a bit like counties) and there is no comprehensive plan for managing the mountain.  There is a proposal to charge people for walking up it, but no agreement between the prefectures as to how the money should be spent, Shizuoka wanting to use it for researching water, and Yamanashi for maintaining the landscape and putting electricity lines underground. 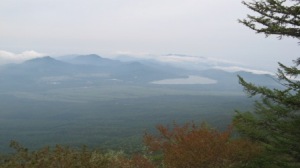 Lake Yamanakako from the fifth station

It struck me that there were things which could be done immediately.  The Subaru road, which takes traffic to the fifth station, should be closed to all except buses.  Numbers in walking groups should be limited, and people walking up, or visiting by bus, should be invited to make a voluntary contribution.

I believe that these should be tried before any compulsory charge is introduced, which is surely not in keeping with its sacred place in Japan’s history and culture. 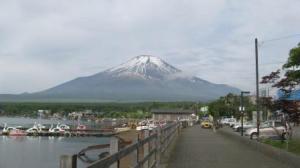 I am the general secretary of the Open Spaces Society and I campaign for public access, paths and open spaces in town and country.
View all posts by campaignerkate →
This entry was posted in Access, common land, Japan, walking and tagged walking. Bookmark the permalink.

1 Response to The boundary between heaven and earth