At 8pm on a Sunday evening in late June we congregate at the end of King’s Ride, Camberley, Surrey for the annual nightjar survey of the Sandhurst heaths.

This area, north of Camberley, is occupied by the Ministry of Defence.  The site is designated as part of the Thames Basin Heaths Special Protection Area because of its heathland birds.

The assembled crowd, which has been summoned by Patrick Crowley who leads the nightjar survey, are mostly local people.  For the last four years I have come here from the Chilterns because I love the opportunity to see different birds.  Consequently I am always raring to go and it is somewhat frustrating that we take some time to get organised, in small groups each with a map. 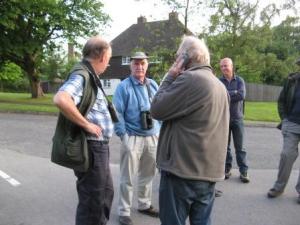 Getting ready to go, Patrick Crowley on the rights contacting the driver.

At last we set off into the heath.  This year I was allocated Wishmoor Bottom, close to King’s Ride; some of the groups drive into the ranges, unlocking the military gates with special permission to go on the training area.  We are in an area with public access, grazed by belted galloways.

The river which crosses our site marks the boundary between Surrey and Bracknell Forest.  The heath is bordered by conifers, with scattered trees in the centre, and heather, gorse and birch, all providing good habitat for nightjars and other species.  I always hope to see woodlark, tree pipit, Dartford warbler, woodcock and hobby, as well as nightjar, none of which I see at home, and I ask my companions, who are familiar with the area, to let me know of anything they see.

By the time we get going we have just over an hour before the witching hour of 9.30pm, when we can expect to start hearing nightjars.  We use the time to search for Dartford warblers in the fairly short but dense heather interspersed with birch.  We hear one and catch a fleeting glimpse of it, but that’s all.  There’s flocks of goldfinches, and I hear stonechat and whitethroat.  We see a possible tree pipit but it’s behaving more like a flycatcher, and a little brown bird which could be tree pipit or woodlark.

As 9.30 approaches we split up and quarter our allotted territory in the fading light.  Offstage there are faint sounds of civilisation.  On the heath it is peaceful.  The sunset is magnificent.

I walk round my patch, and am momentarily misled by the buzz of the electricity wires that cross the site, they sound quite like a nightjar.  Then, nearer to 10 than 9.30, I hear my first real churring, unmistakeable.  Other birds join in further away and I cup my ears to catch the sound.  It’s magic.  I don’t see any nightjars this year, but a woodcock peeping against the night sky is a lovely sight.

Report
And so at about 10.45 we reconvene at the cars and report our findings to Patrick who later records them on a map and tells us that, unexpectedly, this year has been as good as last (33 churring males), though not as good the best year of all, 2010 (my first) when we recorded 39.

Even if I don’t see that many birds I enjoy my annual visit to the heath.

I am the general secretary of the Open Spaces Society and I campaign for public access, paths and open spaces in town and country.
View all posts by campaignerkate →
This entry was posted in Birds and tagged Birds, military training, nightjar, Surrey. Bookmark the permalink.

3 Responses to Into eight-o’clock Camberley