There’s nothing new about grouse-moor controversy.  This year it’s about the threat of hen harrier persecution by game keepers.  A quarter of a century ago it was about common-land legislation.

Twenty-five years ago today, the Open Spaces Society arranged for a brace of grouse, shot on the twelfth of August 1989, to be delivered to Mrs Thatcher at Number Ten.  The government was shilly-shallying over the commons legislation it had promised to introduce.

The society wrote to the PM:
Early next week you will receive on your doorstep a brace of grouse, shot on the Glorious Twelfth.  While we hope you will accept and enjoy these with our compliments, they come to you with a message.  Our grouse with the government is its failure to give us the new law for common land, promised in your party’s manifesto in 1987, as recommended by the Common Land Forum in 1986.

The society reminded her of the Common Land Forum report,  a pact between a wide range of interests—farmers, landowners, conservationists, recreation bodies and local authority organisations.  It made three principal recommendations for the new law:  a right to walk on all commons, proper management and an end to deregistration unless it could be proved beyond all doubt that the common had been wrongly registered. 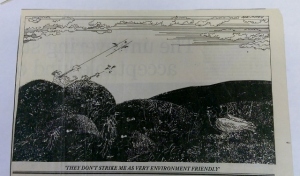 Cartoon by Heath in The Independent, 9 August 1989

The letter continued: As the forum was completing its work, a handful of grouse-moor owners, fearing for their lucrative shoots, formed the Moorland Association, which opposed the commons legislation.  It claimed that the public right to walk on all commons would threaten its efforts to manage the heather for conservation.

The society pointed out that the association wanted to restrict people to public paths. so that they wouldn’t see some of the less attractive aspects of the gamekeepers’ work (such as gassing fox cub with cyanide).  The society urged Mrs T not to allow the interests of a few grouse-shooters to torpedo legislation which had such widespread support.

The society reckoned the grouse gift would be a more effective memo to the PM than yet another recital of the arguments on which ministers had failed to act.

Reply
The reply, from the PM’s secretary on 29 August, did not even mention the grouse and merely reiterated that ‘a statement about the government’s intentions is expected later this year …’.

In fact, we did not win access to all common land for another 11 years, in the Countryside and Rights of Way (CROW) Act 2000.  Registration and management issues were addressed in the Commons Act 2006 and have still not been fully sorted. 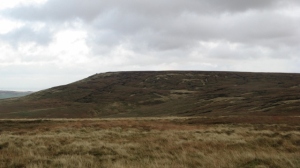 Rishworth Moor, Calderdale, a common with rights to walk and ride

But at least the CROW Act has proved that the grouse-moor fraternity was wrong: there is no general conflict between public access and grouse-moor management, the two can co-exist.

We shall never know if Maggie enjoyed the grouse.