We came upon Bolton Landing by chance, and it was just what we wanted.  Bolton Landing is at the southern end of Lake George in the Adirondack Mountains, New York State.

It was Sunday 21 June, the day after the wedding of my nephew Peter Casselman to Erica Hoyt in Lake Placid and, feeling fairly exhausted, we (sister Sue, her husband Fritz and I) were heading back to Boston, with friends (Paul Kaplan and Beth Sutherland) who were going to New York City.  We headed south after spending a wet day near Lake Placid, but with improving weather we were ready to stop when we saw that Bolton Landing was nearby.

We arrived at about 6pm and it was all very quiet.  The first hotels we came to were pretty posh, boating places and did not appear to be taking guests.  Then we came to a motel called Carey’s, the sort that we used to stay in in the 60s and 70s, and booked two cabins with no trouble.

Nostalgic
It was just what we needed, a fridge for the wine we had brought with us and a place to sit out—looking at our cars as happens at motels, and beyond that to the lake.  It was nostalgic, and good to know such places still exist.

Sitting out at Carey’s

After sitting out on our deck we wandered down to the Algonquin Restaurant for supper on the lakeshore enjoying the long evening on the longest day.

The view from the Algonquin Restaurant

The next morning was glorious and I ran down to the lake for a swim; it was quiet and the water was still and warm. Sue and Beth joined me a bit later.

Paul made a foray into town for breakfast which we ate outside the cabin, with view of car and lake.  This is the lake about which Thomas Jefferson wrote to his daughter on 31 May 1791:

Lake George is without comparison, the most beautiful water I ever saw; formed by a contour of mountains into a basin … finely interspersed with islands, its water limpid as crystal, and the mountain sides covered with rich groves … down to the water-edge: here and there precipices of rock to checker the scene and save it from monotony.’

After checking out, we went almost next door to the Marcella Sembrich opera museum.  You may not have heard of her; I hadn’t.  Marcella (1858-1917) was an opera singer.  Her real name was Prakseda Marcelina Kochańska and she came from Galicia in Poland (now the Ukraine) and was taught by Franz Liszt who recognised her fine qualities as a singer.

Wings of song
Ernest Hutcheson (Australian pianist, composer and teacher), in his address to the Juillard School of Music, New York, in 1935, recorded that Liszt said to Marcella: ‘You have three pairs of wings with which to cleave the musical firmament: the piano, the violin and your voice’.  Comments Ernest: ‘And with his keen insight he counselled her to make her flight on wings of song.’

Marcella met just about every well-known composer and singer of her time.  She sang with the Metropolitan Opera from 1883 to 1909 and on concert tours until 1917.  On leaving the stage she devoted her life to teaching and directed the vocal departments of the Juilliard School of Music in New York and the Curtis Institute of Music in Philadelphia.

She spent the summers on Lake George from 1922 to 1934.  She lived at the lakeside mansion of Bay View (which no longer exists), and her teaching studio was built in 1924.  Hilltop Cottage was built nearby, also in 1924, as a caretaker’s cottage, with a dorm for the students on the second floor.

Memorabilia
The salmon-pink museum consists of two rooms, and you get a conducted tour for no charge (although donations are appreciated).  It is full of memorabilia, including the dress she wore to perform Queen of the Night in The Magic Flute (although this will be removed before long as it is beginning to deteriorate).  There are many photos and correspondence with famous composers and musicians. 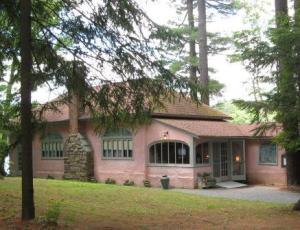 The teaching studio has a mass of information too.  An extract from an article in 1932 by Ugo Ara, a member of the Flonzaley Quartet, tells us:

Surrounding woods and rocks that once rang with rattle of musketry and yells of savages are today echoing melodies of Mozart, Verdi, Gounod, Puccini as well as to accents of Beethoven, Brahms, Debussy and Strauss.  Despite complex professional activities, Madame Sembrich daily spends part of her time gardening, reading in Polish, English, French, German or Italian, and in going over new compositions. … One of the last callers of the season motored thousands of miles and having obtained the guidance he sought, parted from her with these simple and touching words: ‘Because we all need you so greatly, be sure to remember to live long.’

Marcella wrote on the value of summer study:

For the artist ever anxious to delve more deeply into his or her work, summer can be a season of much thoughtful reflecting. … Singers during their young years, if they expect to equip themselves for a career, should cultivate in summer the habit of doing their utmost to concentrate on the all-absorbing road before them.  Faulty diction is a frequent handicap, largely because insufficient stress is laid upon the pronouncing of strictly pure vowels, and the great importance of consonants is ignored.

The students also have recorded their memories.  Lucielle Browning fondly remembered her days in Bolton Landing, including

the luscious meals prepared by the Swedish caretakers … that first summer I gained 15 pounds!  The daily routine was up at 6.30, before breakfast climb the hills behind the cottage.  After breakfast, vocalizing, language lessons with the Italian instructor Ugo Ara, and wonderful sessions with Serguis Kagen, who coached us in the Italian, German and English repertoire, harmony lesson, etc.  Lessons with Mme Sembrich were twice a week.  During the weekend there would be hymn sings, visits to the Homers, or tea at the Ochs.  There was also time for boating, swimming and horseback riding.

Anna Hamlin recalled: ‘Mme Sembrich was a frightening personality in lessons, but an amusing and entertaining woman, socially.’

The setting, right on the lake with the wooded hills beyond is very lovely. 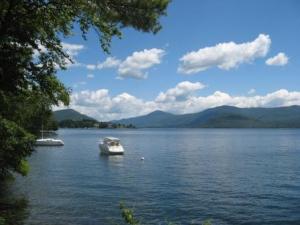 Lake George from the museum

We wandered through the woods behind the museum where the students would have roamed. 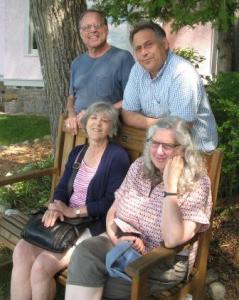 Our next bit of serendipity was the discovery, just up the road, of Up Yonda Farm, an environmental education centre with trails through the woods.

We hiked to the top of the hill on the summit trail.  There was a fine view over the lake and its many islands.

An interpretation board at the top claims that Lake George is one of the cleanest lakes in the world.  It has a small watershed so there is a limited area from which rainwater can pick up pollution on its way to the lake.  The surrounding mountains are heavily forested, this slows the flow of water and reduces erosion and pollution.  The lake’s shore is largely undeveloped.

As we sat eating lunch a broad-winged buzzard lazily traversed the sky and on our way down we saw a tree swallow at one of the nest boxes.

It was a great way to wind down after the wedding.

I am the general secretary of the Open Spaces Society and I campaign for public access, paths and open spaces in town and country.
View all posts by campaignerkate →
This entry was posted in Music, USA and tagged Bolton Landing, George Lake, Liszt, Marcella Sembrich, Up Yonda Farm. Bookmark the permalink.