Six hundred years after the Battle of Agincourt (if you ignore the switch to the Gregorian calendar), on Sunday 25 October 2015, I joined Sheringham and Norwich ramblers and Cromer Walkers Are Welcome, on a walk from Cromer to Erpingham church in north Norfolk.  This was part of the Norfolk Walking Festival organised by Norfolk County Council

We set off from Cromer and followed the Weavers’ Way for much of the route, passing the lovely Norfolk churches at Felbrigg and Metton.

The paths were generally in good order.

As we walked between churches I felt that wonderful sense of history from paths which have for centuries taken those direct routes to and from the church towers.

Commons
We also visited a couple of commons: Hanworth where there was a dispute which ended in court, and Thwaite, where an application for fencing was rejected in 1997 but has now been revived for the introduction of grazing (and is opposed by the Open Spaces Society on landscape grounds). 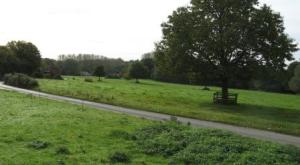 Indeed the decision of the 1997 inspector, Gyllian Grindey, for Thwaite common is one I often quote:

… the present benefit to the neighbourhood attached to the common relates to its vital contribution to the appearance, character and local distinctiveness of the hamlet … It seems to me that the common is a parochial monument of a sort. … Its openness to communal use is a part of its local distinctiveness, in contrast to almost all other rural land.

The day was organised by the indefatigable Don Davenport of the Sheringham Ramblers and Cromer Walkers Are Welcome.  We stopped for lunch at Thwaite church with its fascinating round tower.

Here Don addressed us from the pulpit, telling us something of the places we had visited so far, and introducing others to speak on topic such as the church’s architecture, and the harrowing disappearance of April Fabb from Metton in 1969, never to be found.

Don in the pulpit

Then we continued to Erpingham village, passing an idiosyncratic wall incorporating items from railways, plumbing and much else.

We arrived at the church, which stands on its own to the south-east of the village.

Here we met friends from Aylsham Walkers Are Welcome, Norman Lamb, the MP for north Norfolk, and many others.

Sir Thomas Erpingham came from the village and was a supporter of Henry Bolingbroke in exile and then of Henry V, playing an important role at Agincourt (though he only gets a couple of lines in Shakespeare’s Henry V).  I bought an excellent booklet in the church, Sir Thomas Erpingham, warrior of Agincourt by Trevor John (Larks Press, £1.50) which records the Battle of Agincourt thus:

… he was one of the three captains who marshalled the English forces into position; he was responsible for the archers.  He rode before them with just two attendants, and exhorted them to fight well for the King’s honour and to save their own lives.  (They were certainly outnumbered by the French, possibly by four to one, but the exact numbers are contested.)  After they had prayed and kissed the earth, Erpingham threw his baton into the air and ordered them to advance, shouting ‘Now strike!’ (‘Nestroque’).  As the drums beat and the archers gave three wild whoops, Erpingham took his place on foot at this sovereign’s side.  Then the ‘air was darkened’ by ‘piercing arrows flying across the sky to pour upon the enemy like a cloud laden with rain’.  The overwhelming victory was seen as God’s justification of the Lancastrian dynasty, and must have given Erpingham great satisfaction.  Only one of his archers was killed in the battle.

Tapestry
There were displays in the church of implements of the time, including arrows and chain mail.  There is also a tapestry woven by Erpingham with Calthorpe Women’s Institute, honouring Sir Thomas and his many roles and military campaigns.  (However, if you read Trevor John’s booklet, you will see that he was not altogether a pleasant character!) 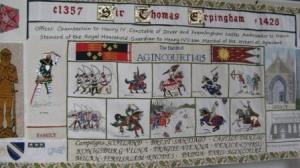 Don invited me to address the gathering in the church, so I stressed the need to celebrate the everyday paths.  Norfolk County Council tends to focus on the named trails, with its Norfolk Trails team managing 11 promoted routes and 200 circular walks (1,200 miles), while the highways department manages the remaining 1,900 miles.  The latter group gets lower priority.  Although we had largely been walking the Weavers’ Way that day, we could see that the ordinary routes too are immensely important and a crucial part of Norfolk’s history and culture, while the three Walkers Are Welcome towns in the county (Aylsham, Cromer and Swaffham) demonstrate that walking is good for local businesses too.

So I urged people to take part in the Ramblers’ Big Pathwatch to record and monitor the state of local paths, and to enjoy walking in the glorious countryside.

And Norfolk now has new coastal access, between Weybourne and Sea Palling.  With the clock change that morning I was able to enjoy the extra hour on Sheringham’s shore.

1 Response to Upon St Crispin’s day