Janette of the wild seas

‘Janette Kerr is a foul-weather painter’ says her entry on the Royal West of England Academy (RWA) website.  Brian Fallon, critic of the Irish Times, called her ‘the best painter of the sea in these islands’.  She is president of the RWA and has a studio in Brindister, West Burrafirth on the north Mainland of Shetland. 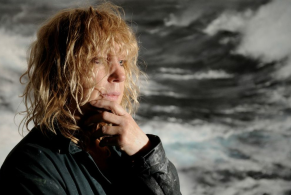 Janette is involved in Extreme Wave Theory, a research project about the relationship between art and science.  This brings together the history and stories of the sea around Shetland and the work of Norwegian oceanographers studying the unpredictability of waves and winds.  She writes about this on her blog. 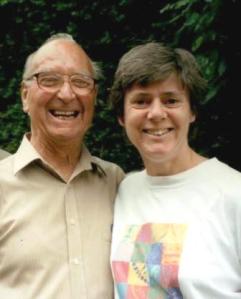 I first met Janette at her mother’s funeral.  I knew her parents, Jim and Marjorie Kerr, for 25 years. They were lifelong socialists and the Open Spaces Society’s feisty local correspondents for East Dorset.  They fought for social justice and free access and were members of the Socialist Party of Great Britain.  Marjorie died in 2009 and Jim a few months later.  They don’t make people like them any more.

Janette and I became friends on Facebook and I often see examples of her brilliant, turbulent paintings there.

Arctic
A couple of months ago she announced that she had been selected to participate in The Arctic Circle 2016, an annual series of art and science expeditions to the high Arctic. She will go for three weeks in October, provided she can raise the money. She needs £5,000 which will be match funded by the British Council and Arts Council International Fund. So she has posted a series of small oil-paintings for sale, at about £50 each, and added some more.  You can see them here; there may still be a few left.

The one I particularly liked, which was painted near her studio, was sold very quickly but Janette kindly painted me another, similar one, which I like just as well.  I have also bought one of Voe of Dale on the west coast of north Mainland.  They are terrific. 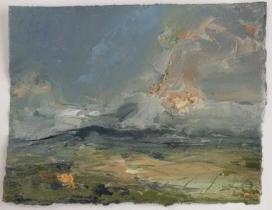 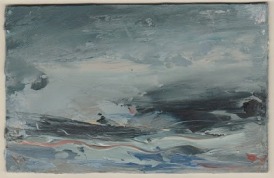 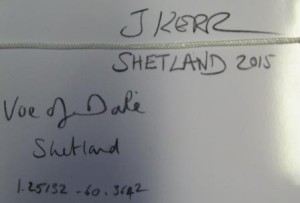 Now when I look at my paintings I think of the wild seas around Shetland and my gutsy campaigning friends Jim and Marjorie.

I am the general secretary of the Open Spaces Society and I campaign for public access, paths and open spaces in town and country.
View all posts by campaignerkate →
This entry was posted in Art, Open Spaces Society, Scotland and tagged Arctic, Brindister, Janette Kerr, Jim and Marjorie Kerr, Royal West of England academy, Shetland. Bookmark the permalink.