In search of ouzels

On 29 May I made my annual early-morning visit to Tavy Cleave on western Dartmoor in search of ring ouzels.  I had seen one there in April (see here). This time I set off from Lane End at 6am, detouring to take in the moor above the leat to hear grasshopper warblers (reported here).

I saw my first ring ouzel near the entrance to the cleave, below Ger Tor.

Looking down the Tavy to Ger Tor

I walked on up, round the corner, past the two waterfalls to the start of the rocky bit where you scramble rather than walk. I arrived here at 8am and sat on a rock in the sun.  There was a spreading, stunted oak tree growing out of the stone and over the rocks.

Before very long I saw two ring ouzels and a cuckoo.

On the way down I heard a further ouzel near the waterfalls, on the other side of the river. 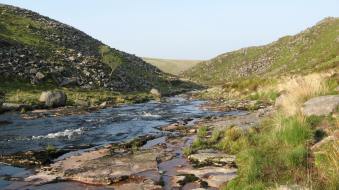 I reported my sightings to the Devon Wildlife Trust which is monitoring the breeding of ring ouzels on Dartmoor,  with the RSPB, British Trust for Ornitology (BTO), Dartmoor National Park Authority and others. Sadly, the ring ouzel is in decline. I am on the mailing list and receive regular updates of Dartmoor sightings and nests.

Asked
In mid July those on the list were asked if we could make a visit to Tavy Cleave to provide further evidence of nesting success or failure.  As I was back in Devon I went on 17 July, an hour later this time.  The grasshopper warblers were still singing in the gorse.  I reached my turn-around point at 8.30 and soon saw two young ouzels flying across the river. While I waited a family of blackcaps emerged from the oak tree growing out of the rocks.

After about half an hour, when I was about to head back,  I saw an adult ouzel, so I waited a bit longer and then saw it with the two young.  Another adult appeared, apparently with a yellow ring on each leg, although it was hard to see.  The BTO is responsible for the ringing.

On my way down I saw another ouzel on the middle group of rocks forming Tavy Cleave tors.

Once again I reported my sitings.  I later learnt that someone else had been up Tavy Cleave that same day and had been more successful at identifying the rings, in fact there were more rings than I had spotted.

It is believed that there have been three nests in Tavy Cleave (I think on my three visits I may have seen birds from all three). One failed but Ger Tor was known to have been successful. The birds I saw at the top of the cleave in July were probably the Ger Tor family. Birds have also bred  in other parts of Dartmoor.  But the figures remain low.

I am the general secretary of the Open Spaces Society and I campaign for public access, paths and open spaces in town and country.
View all posts by campaignerkate →
This entry was posted in Birds, Dartmoor, RSPB and tagged Dartmoor, ring ouzel, Tavy Cleave. Bookmark the permalink.