The late Geoff Eastwood, the Ramblers’ vice-president and activist in East Yorkshire and Derwent Area, would have been 77 today, 26 May.  We miss him greatly.  Geoff played a leading role in the creation of the Wolds Way national trail and he saved many paths in the old Humberside county from hideous diversions.

Geoff was born in 1940 in Littleport, near Ely in Cambridgeshire, to Rowland and Stella Eastwood.  He went to Southampton University to study for a BSc and PhD in biochemistry and physiology.  Here he met his future wife Pat, who was studying languages.  They were married in 1963 and enjoyed walking locally on Southampton Common and in Romsey water meadows.

Research
Geoff and Pat moved to the East Riding village of Lockington in 1970 when Geoff took a research post with Smith, Kline and French.  They had two daughters, Helen and Clare.  Helen took her first steps on a walking holiday led by Geoff in the Auvergne.  In the mid 1970s Geoff was appointed senior then principal lecturer at Hull College of Further Education, where he became head of biology.  He guided the department through changing times as the college approached polytechnic status (finally to become Lincoln University in 1992).

After Geoff and Pat were divorced, Geoff moved to Driffield in 1987 with his partner Kathryn Gregory.  He retired early in 1991, and soon took up new challenges, becoming town clerk of Driffield from 1991 to 2002, a director of the Driffield Navigation Trust from 1991 to 2013, and representative of the Ramblers on the Howardian Hills Area of Outstanding Natural Beauty Joint Advisory Committee.  During their 30 years together, Kathryn fully supported Geoff in his committee work and often accompanied him on his foreign tours and meetings.  They both loved visiting Asia, especially Vietnam.

Confronted
While they were living in Lockington, Geoff and Pat were confronted on a walk by a farmer’s wife who insisted there was no public right of way.  Geoff was sure that there was. This incident galvanised him into joining the Ramblers.  He became East Riding and Derwent Area secretary in 1972 and coordinated campaigns for recognition of public paths in the old Humberside county area, fighting plans to rationalise them.  It was a hostile environment for those wishing to protect our paths and make the countryside better for walkers.

Geoff helped to lead the campaign for the Yorkshire Wolds Way which, in 1982, became a long-distance path (now national trail).  He was at the forefront of the Ramblers’ alternative opening of the way on 2 October 1982, in protest at the Countryside Commission’s choice of route.  The commission yielded to the pressures of landowner Lord Middleton who did not want it to go through the medieval village of Wharram Percy.  I write about this here.  Helen cut the ribbon at our opening at Millington Pastures, Nettledale.

Geoff and Helen joined us on the 25th anniversary of the event. 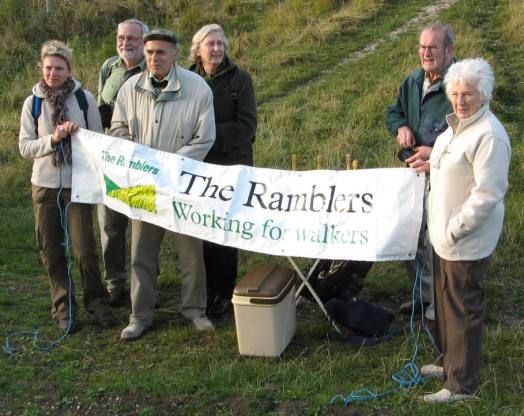 A popular leader of local walks Geoff also organised camping weekends all over Britain.  He wrote several walks guides and leaflets which are still in use.  He took on the demanding role of area footpath secretary from 1979 to 2002.

While engaged with his local Ramblers’ work, Geoff became active in the Ramblers nationally.  In 1974 he was elected to the national executive committee, becoming vice-chairman in 1989 and chairman from 1990 to 1993.  He returned to the committee from 1993-6, before becoming a national vice-president in 1998.

Relaxed
I first met Geoff when I entered the world of Ramblers at national council, held at Keble College in Oxford in 1982.  He was very kind to me and backed me as a young committee member.  His chairmanship was relaxed, good-natured and unhurried, so his meetings were not quick but they were invariably friendly.

In 1972 Geoff started to lead for Ramblers Holidays in Europe and beyond.  He became chairman of RH and then of the new Ramblers Holidays Charitable Trust until his retirement on health grounds in 2013.  He represented the trust on the Ramblers committee (later board of trustees) and also at annual meetings of the European Ramblers Association.

Geoff was a man of vitality and energy, enjoying a successful career in research and higher education.  He was held in esteem by students and colleagues alike.  At the same time he made major contributions as a volunteer to the outdoors movement locally and nationally and by his dedicated service with Ramblers Holidays.

He developed Parkinson’s disease and in 2016 had a serious fall at home resulting in a massive haematoma.  He was transferred to St Catherine’s Hospice in Scarborough where he received wonderful care, and Kathryn was with him until he died on 25 June 2016.  He is survived by Pat, Helen, Clare and Kathryn.

With thanks to Peter Ayling for the notes of Geoff’s life.

I am the general secretary of the Open Spaces Society and I campaign for public access, paths and open spaces in town and country.
View all posts by campaignerkate →
This entry was posted in Access, National trail, Obituary, Ramblers, walking and tagged Geoff Eastwood, Ramblers, Ramblers East Yorkshire and Derwent Area, Wolds Way. Bookmark the permalink.