Fun part of the job

One of the best things about being a Ramblers’ trustee is the chance to get out and meet our volunteers.  Last month I visited the East Yorkshire and Derwent Area with Van Griffiths, chief executive, and Simon Kellas, governance manager, for a full and tightly-timed day.

We arrived at York station at 10am and were met by Roy Hunt, Area chair, who drove us across the North York Moors in heavenly sunshine.  We stopped at Fylingthorpe, just west of Robin Hood’s Bay and took a footpath across fields (coming across a dangerously wobbly stile at NZ 945048 which Van recorded using the Pathwatch app). 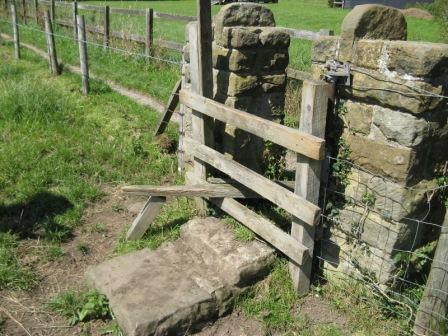 We crossed the old railway between Scarborough and Whitby and continued on a downhill path where we came to the Ramblers’ Scarborough Group working party, putting up a handrail beside the path.

The working party has an excellent relationship with the North York Moors National Park Authority, and the rangers are extremely grateful for the work they put in.  The authority has suffered cuts in the ranger service and the Ramblers help to lessen the blow.  The senior ranger, Bernie McLinden, spoke highly of their efforts and dedication.

We arrived as they were breaking for lunch and were able to enjoy some of their cake, though we hadn’t earned it.

Van, Simon and I absconded briefly to get a glimpse of the sea, for the Cleveland Way was only a short distance away at the bottom of the path.

Glimpse of the sea: Robin Hood’s Bay from the Cleveland Way

We couldn’t stay long; we had to press on, for an excellent lunch at the Everley Country House Café near Hackness, and thence to Fridaythorpe.  Here we met Peter Ayling, Area president; Anne Laing, Area communications officer; George Malcolm, Area treasurer, and Malcolm Hodgson, National Trail officer for the Yorkshire Wolds Way and the Cleveland Way.  I was last in Fridaythorpe on 2 October 2007 to celebrate the 25th anniversary of the Wolds Way, which I wrote about here.  Sadly, the pub has since closed.

On this sunny afternoon we followed some of the same route that we had walked in 2007.  We headed south to Holm Dale, where the steep slopes qualify as ‘downland’ on the access maps, so they are access land, while the flatter tops, which have been ploughed, are not. 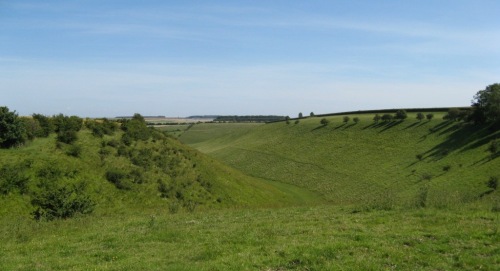 At the start of the dale we left the Wolds Way and went south west over Huggate Wold with its wide skies to Wold House Farm.

We walked through the expansive farmyard, past a statue of David Midgley, foreman of Huggate Wold from 1952 to 1988.

Just west of the farm we picked up the national trail again and followed it to the west end of Horse Dale, and then left the trail to walk freely above the dale on the access land which we won under the Countryside and Rights of Way Act 2000.  It is an exceptionally beautiful, curving valley in an unsung part of England.

We passed one of the benches on the Wolds Way, at the junction of Horse Dale, Holm Dale and Harper Dale, on which is carved a poem by John Wedgwood Clarke:

We have rippled the earth with our desire to be here not there.  We have driven the dale’s wedge of hush home between us.  But you move, as we moved, in the ghost of water.  A hare rips away from the dead, Thuds down the dyke and out into everywhere the grasses foam. 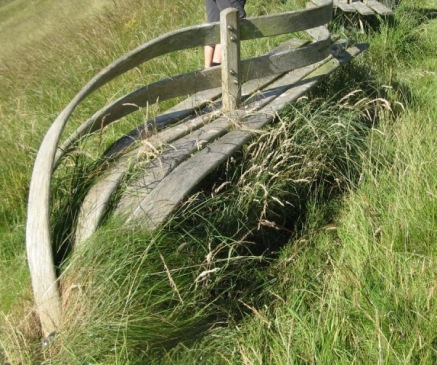 Bench at the junction of three dales

We followed Holm Dale back to Fridaythorpe.  It is an immensely satisfying landscape with its curving shapes and inviting access land.

Heading back along Holm Dale

After supper at the nearby Triton Inn in Sledmere we went to the village hall in Fimber for the Area committee meeting.  I would have liked more time to study the extensive information about the history of the village which was displayed on the walls.

Purpose
But we were there for a purpose.  The meeting was well run and interesting, with the Area council (made up of Area officers and representatives from the eight groups) discussing the sorts of things with which we all grapple—how to recruit more members, find volunteers, encourage diversity and communicate better between ourselves and with the centre.  It’s good that the Area is so aware of all these issues and keen to tackle them.

And so we returned to York, for an overnight stay before the journey home.  I was full of sun and beautiful scenery, and encouraged by the energy and enthusiasm of the Ramblers in this splendid part of Yorkshire. 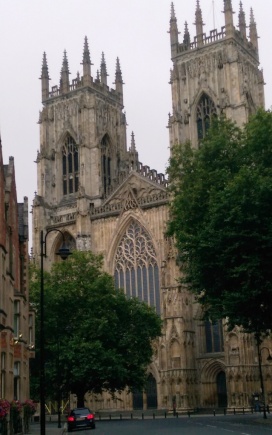 The Ramblers will be looking for more trustees next year—so if you enjoyed this blog, why not consider standing?