My second Ramblers’ AGM of the season was in East Sussex on 27 January.  The Ramblers’ Sussex Area covers East and West Sussex and Brighton and Hove.  I had last been to a Ramblers’ event in Sussex when I helped to relaunch the Sussex Border Path in September 2016.

The AGM was held in the village of East Dean in the South Downs National Park near Eastbourne.  The pre-AGM morning walk was organised by the Beachy Head group.

East Dean has won East Sussex Best-Kept Village awards (for small and large village) which are displayed on a wall.

It is not surprising that it is a winner, it is very attractive, with cottages around a large green. 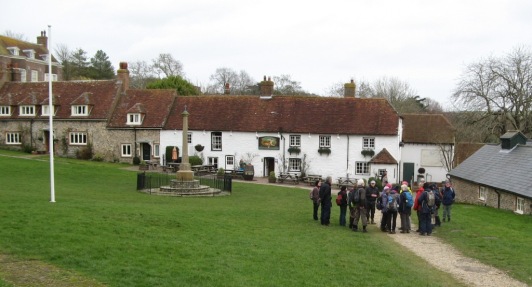 Our group gathers in East Dean

Our walk took us up the hill to Friston where we had a fine view over the valley, then on past Crowlink to the clifftop, with the Seven Sisters rolling away to either side. 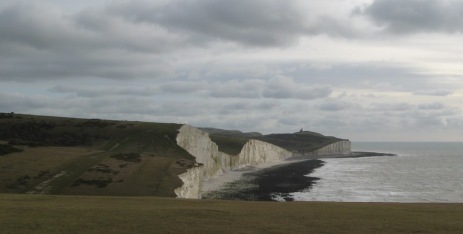 We followed the cliffs eastward to Birling Gap where we stopped to look at the exhibition in the National Trust visitor centre.  Particularly striking is the information on how quickly the coast is eroding here—which is why it is so important that the England Coast Path has a ‘roll back’ provision, enabling the path to move back with the coastline.

There was also an exhibition of Eric Slater’s work and a leaflet about the Slater Trail which you can start at Seaford Head or South Hill Barn. 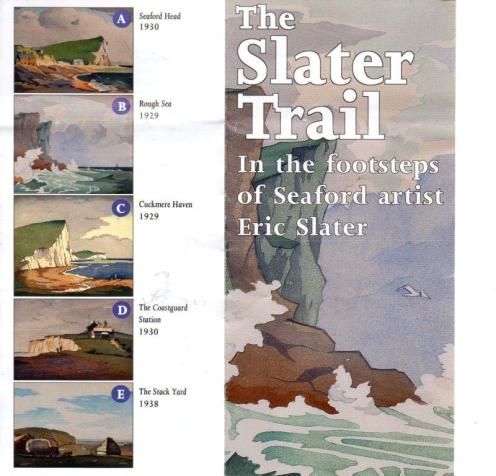 Then we set off again up the cliff to Belle Tout lighthouse, with the Seven Sisters behind us.

From there we went inland and back to East Dean.  I had time for a visit to the church, with Malcolm McDonnell and Graham Elvey, before the meeting. 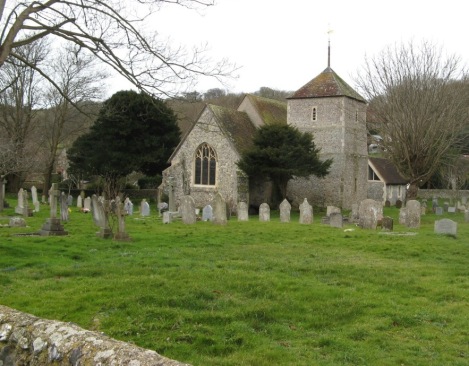 It has a Tapsel gate, unique to this part of Sussex, which enables coffins to be carried through without opening the gate wide enough to allow cattle to pass.

Inside the church Malcolm pointed out that the altar is not aligned with the nave.  This anomaly is not mentioned in Pevsner, though he does refer to a Gothic lengthening of the nave in 1885 an a further one in 1961, which may account for it being offline. 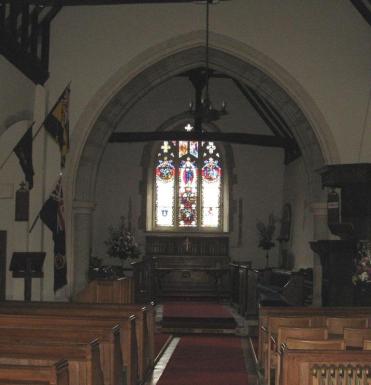 East Dean church: the alter is not aligned with the nave

In the churchyard is the grave of Harry and Julya Comber.  Harry was a great campaigner for paths; he administered the Open Spaces Society’s Eastbourne Downland Footpath Fund which was established in 1959 for signposting paths in the area.  In 1989 the OSS passed the remaining money to the Ramblers for its Jubilee Way. 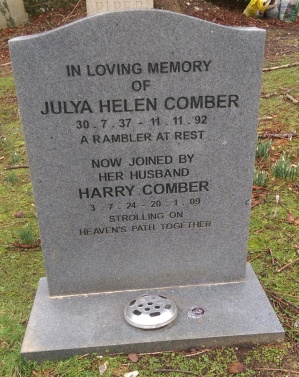 In the afternoon about 70 members congregated in the village hall for the AGM, which was deftly conducted by outgoing vice-chair Clive Grummett.  He had succeeded in finding a new chair, Roger Abel, who took over part-way through.  Sussex Area has been refreshingly efficient about filling vacant volunteer-posts and the only post which was unfilled was West Sussex footpath officer.

The Area’s annual report is packed with information and demonstrates an impressive amount of work defending and claiming paths, and fighting for the threatened countryside.

Volunteer award
It was a joy to me to present a Ramblers’ volunteer award to Chris Smith for his outstanding contribution to walking.  Among many other campaigns Chris has spearheaded the Don’t Lose Your Way project in Sussex—researching the records to apply for the addition of historical routes to the definitive map before 1 January 2026 when the opportunity ceases.  He has convened a group of 20 volunteers from the Ramblers, Open Spaces Society, British Horse Society and Trail Riders’ Fellowship to do this work.  It is a massive task and the group has already put in or is investigating more than 40 claims for routes.

I have known Chris for 30 years.  He most certainly deserves this award. 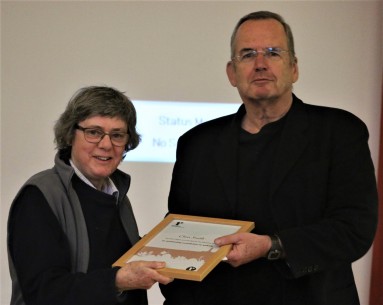 Chris Smith, winner of the Ramblers’ volunteer award for his work on paths in Sussex