The Forest at forty

I was pleased to join the Forest of Dean Ramblers for their fortieth anniversary celebrations at Yorkley on 22 September, and the rain did not dampen their spirits.

I arrived rather late so did not do the full walk, but even so got soaked.  It was fun to walk again with my friend Marika Kovacs from Hereford.

Walk in the rain

We were glad to return to the community hall for tea and cakes and a great gathering. Robin and Susan Warren and Ray Short, the founder chairman, secretary and treasurer respectively, cut the cake. 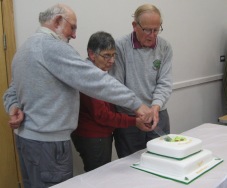 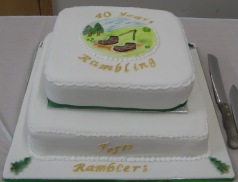 The group was the second in Gloucestershire, Cirencester having been formed first in 1974.  Roger Cox and Susan Warren (then Fox) set up the group.  I presented awards to Roger and Susan who have led walks for the group throughout the 40 years and continue to do so: they were given personalised Ordnance Survey maps. 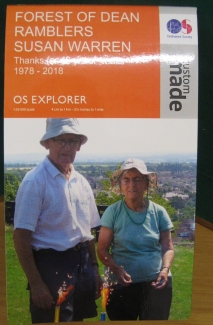 I congratulated the group on its 40 years of achievement.  Through the production and sale of walks books it has raised significant sums of money for path improvements.  For instance, I took part in the ceremony to reopen Upper Ford bridge over the River Lyd in June 2015. 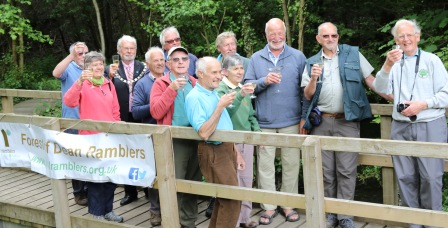 It was fun to browse through all the old programmes and posters which the group had produced over the years.

Long may the Forest Ramblers continue to enjoy their walks and their work on the paths.

I am the general secretary of the Open Spaces Society and I campaign for public access, paths and open spaces in town and country.
View all posts by campaignerkate →
This entry was posted in Access, campaigns, Ramblers, walking and tagged Forest of Dean, Forest of Dean Ramblers' Group, Upper Forge bridge, walks. Bookmark the permalink.