Twenty years ago today I was on a hillside in Calderdale in the snow, wondering whether the government was going to keep its promise of legislating for public access in England and Wales.  This was the day when it would be revealed.

The Labour government had been elected in May 1997 with a manifesto commitment to introduce a legal right to roam.  Then in 1998 it wobbled, and carried out a consultation on whether greater access should be provided by law or voluntary means.  At last, on 8 March 1999 the government was to announce what it would do.

Unfavourable
The Ramblers did not know what the outcome would be, but we pushed a story over the preceding week that the government had caved in, indeed, we genuinely feared that it had.  If the announcement was unfavourable we could say that this was what we had anticipated, and if it went the right way our celebration would be all the greater. 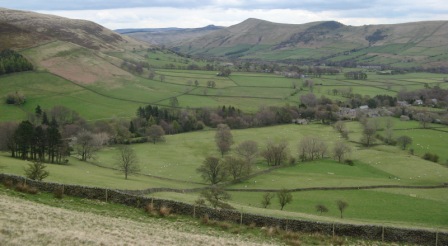 On the day of the announcement, a Monday, Ramblers’ spokespeople were posted around the country.  I was at Widdop, above Hebden Bridge in Calderdale where we had in the past held many access rallies close to forbidden land.  Dave Beskine, who had brilliantly led the campaign, was near Ranmore Common, a controversial site near Dorking in Surrey where access was denied.

I stayed in Hebden Bridge on the Sunday night, having driven there from the Ramblers Welsh Council meeting in Abergavenny the day before.  The government announcement was scheduled for the afternoon.

Widdop
I began the day early with a live interview on my phone with Radio Berkshire.  Then I drove with access campaigner Nicky Warden up to Widdop reservoir for an interview with News 24 in the snow, with the Country Landowners’ Association regional director, Dorothy Fairbairn. 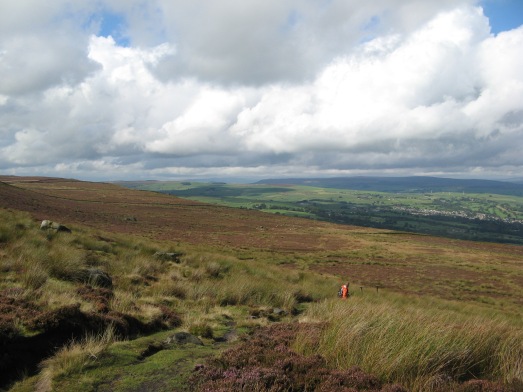 As I drove back to Hebden Bridge for breakfast I heard Dave Beskine’s interview on the Today programme from Ranmore Common.  This was preceded by one with Gordon Prentice.  Gordon was Labour MP for Pendle, who was one of the champions of freedom to roam and who, with Paddy Tipping (Labour, Sherwood) had promoted private members’ bills and ten-minute rule bills to prod the government into action.  After Dave’s interview there was one with the Country Landowners’ Association president Ian McNicol about how landowners provided sufficient voluntary access and therefore legal access was not necessary (which we had already debunked many times over).

The view to Heptonstall in Calderdale, where we campaigned for access

I bought the national newspapers in Hebden Bridge, and the headlines were gloomy about public access, as we had expected.  Then I went back to Widdop for an interview with the BBC, to find Dorothy Fairbairn there again.  Local Ramblers arrived and we did more interviews with ITN and other radio and TV stations, and walked to and fro in the snow.  I had to keep driving up the hill for a mobile signal.  There was a message from Dave Beskine saying that (the late) Stephen Tindale, Michael Meacher’s assistant, had told him it would be OK for us, but I hardly dared hope.

Gordon Prentice (left), Michael Meacher and ramblers on the approach to Boulsworth Hill, which was forbidden land then (1997).,

With some of the Ramblers we then went to the White Lion pub in Heptonstall, to warm up with a late lunch and to await further news.  It came with a call from the Ramblers’ press office.  The government had announced it would legislate for access.

We then headed down to Midgehole, where Gwen Goddard and Harry Sculthorpe lived, to receive the statement by fax from the Ramblers.

Statement
Meacher had made a statement to the House of Commons at 3.31pm.  The nub of it was:

I can confirm that we have decided to introduce legislation as soon as parliamentary time allows to provide for a general statutory right of area access. … Almost 50 years ago, a Labour Government introduced legislation to safeguard our finest countryside and to open it to the nation. The largely voluntary approach to access in the National Parks and Access to the Open Countryside Act 1949 has proved inadequate.  Glorious parts of our heritage are still the preserve of the few, not the delight of the many.  As soon as parliamentary time permits we will introduce legislation to remedy that.  We look forward to discussing widely the details of the package, but we are firm on the principles.  This balanced package fully meets the commitment that we gave in our manifesto and will be a lasting tribute to the memory of John Smith.  I trust that hon members on both sides of the house will support it.

It was a proud moment for Michael: he had put up with Tony Blair’s procrastination and appeasement of landowners for far longer than he wanted, but at last he could announce the government’s intentions.  How we cheered and celebrated. 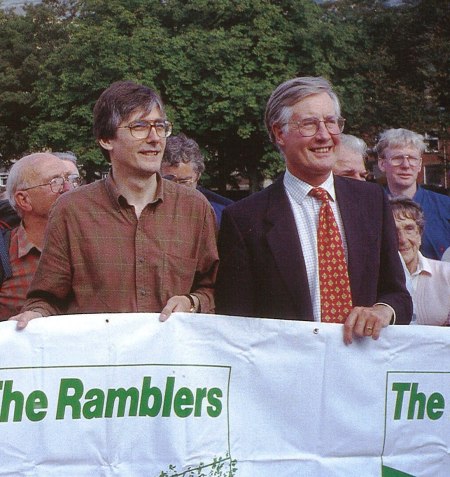 Gordon Prentice (left) and Michael Meacher at the Ramblers’ rally in Todmorden, September 1998

Then I had a call from Radio Leeds and had to dash into Leeds in the rush hour.  I just missed getting there in time for the 6 o’clock news but I did an interview for the 9 o’clock news and then had to set off for home on the M1.  As I was driving, the Ramblers’ press office came through on my phone (hands’ free) to ask me to go on BBC 2 Newsnight.  I said I would if I could get there in time.  Luckily I just made it, and I walked into the BBC studio, fresh from the hill in my trainers to join a jubilant Michael Meacher, an angry Ian McNicol and the path-blocking landowner Nicholas van Hoogstraten.  I had told Newsnight that van H was irrelevant as this was an access story but they wanted him for a bit of colour.

I didn’t say much on the programme except to express our pleasure and thanks to the government, but it really did not matter.  We had won the promise of legislation and it was a moment to celebrate. 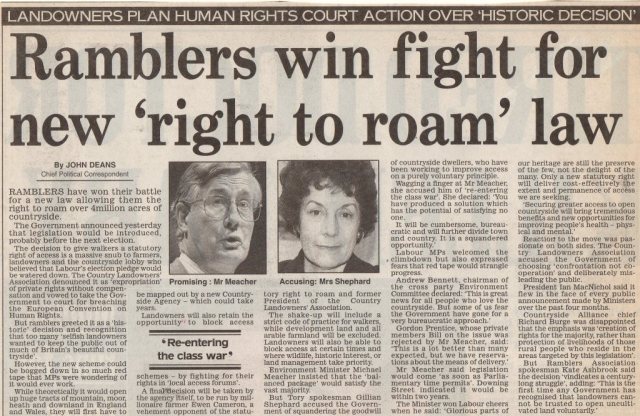 I am the general secretary of the Open Spaces Society and I campaign for public access, paths and open spaces in town and country.
View all posts by campaignerkate →
This entry was posted in Access, campaigns, Open country, Ramblers, walking and tagged Michael Meacher, public access, Ramblers, right to roam, Widdop. Bookmark the permalink.

1 Response to A memorable day