Another anniversary: 20 years ago today, 14 March 1999, Ramblers rallied on Shirburn Hill in the Oxfordshire Chilterns, swarm onto the escarpment and can be seen stretching away into the distance.

We had organised the rally when it appeared that the Labour government would break its promise to legislate for freedom to roam on open country.  One of our champions, Gordon Prentice (then Labour MP for Pendle in Lancashire), had sponsored a private Right to Roam Bill (drafted by the Ramblers) to embarrass the government into taking action.  The bill’s second reading was scheduled for 26 March and we organised the rally to show support from all corners of the country.  Then, when the government made its welcome and unexpected announcement on 8 March that it would legislate, we turned the rally in to a celebration.

Flyer to call Ramblers to the Shirburn Hill rally

People travelled long distances, from Northumberland, Yorkshire, North Wales and Devon.  Many Ramblers’ Areas organised coaches.  Ramblers’ volunteers are amazing!  The meeting point was Cowleaze Wood car-park in the Forestry Commission woodland at the top of the hill.  The rally was on a footpath which runs from the top of Shirburn Hill down the Chiltern escarpment to the Ridgeway at the foot.  Shirburn Hill and its neighbour Pyrton Hill were a downland battleground where the landowner, Viscount Parker, son and then heir of the eighth Earl of Macclesfield, had banned access. 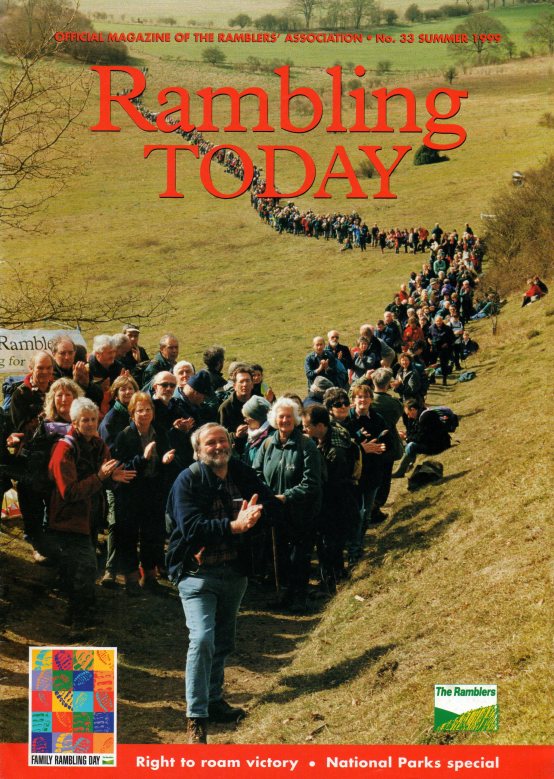 The cover of the Ramblers’ magazine Rambling Today, summer 1999, shows the rally.  In front is the late Geoff Eastwood of East Yorkshire and Derwent Area. Photo: Ulrike Preuss.

There was a logistical problem because the only access to the rally site from the car-park was over a stile, across a field, and over another stile.  It was evident that it would take a long time for everyone to get there.  Jo Bird, a member of the Ramblers’ executive committee who knew the site, suggested that some people should be encouraged to approach from the bottom and she agreed to organise this.  Areas coming from the north and west were asked to ring Jo so that she could arrange for them to park in Watlington.

We had cleared this with the police, but unfortunately during the rally they went to Watlington and told the coaches there to park at Cowleaze Wood.  This resulted in a serious traffic-jam in the car-park and much confusion among the walkers when they discovered the coaches were not where they had expected!

Snaked
We reckoned that 2,500 ramblers gathered on the hilltop and snaked down the footpath.  We told everyone to stick to the legal route so that the landowner could not accuse us of trespass.  Our speakers were Gordon Prentice, Andrew Bennett (Ramblers’ president and Labour MP for Denton and Reddish who had for decades been an invaluable help to us), Jane Griffiths (Labour MP for Reading East) and Brian Hodgson (an extremely supportive Oxfordshire County Councillor).  I was the MC, and Cath Mackay (Ramblers’ vice-chairman) and Dave Beskine (campaigns director) also spoke.

We had a public-address system but it could not cope with the distance nor the wind, so people near the bottom of the hill got the messages in triplicate as our words bounced around the hills.  But nobody minded, there was an enormous feeling of camaraderie and celebration at the biggest-ever Ramblers’ event, with the promise of access legislation to come.

I am the general secretary of the Open Spaces Society and I campaign for public access, paths and open spaces in town and country.
View all posts by campaignerkate →
This entry was posted in Access, AONB, campaigns, Chilterns, Open country, Public paths, Ramblers, walking and tagged freedom to roam, open country, rally, Ramblers, Shirburn Hill. Bookmark the permalink.