I stood on the banks of the River Wharfe, just north of Burley in Wharfedale in North Yorkshire, looking across to west Yorkshire and the Nidderdale Area of Outstanding Natural Beauty.   I should be able to cross here but, even in mid June, the stepping-stones marked on the Ordnance Survey map are covered in water and it would be dangerous.  (You can see a map of the location here.  It is at grid reference SE 165473.) 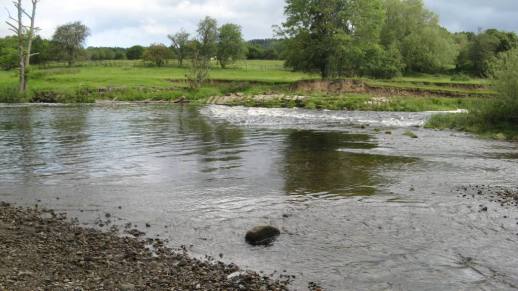 The site of the stepping stones

The water was gushing over Burley weir, a little upstream, while a heron stood by the water, waiting. 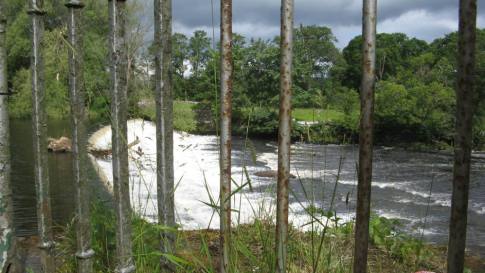 The sand martins were nesting in the bank opposite, and were flitting about in a carefree manner.  There were two herons on the far bank.  It is a beautiful spot.  I can well understand the frustration of walkers whose plans of reaching the other bank are ruined because they have to make a long detour or catch a bus.  There is no other crossing between Otley to the east and Ilkley to the west.

The excellent Burley Bridge Association (BBA), of which I am a life member, is leading the campaign for a bridge.  It is a campaign which has run for 120 years.  As the BBA records in its leaflet, a public meeting in 1896 voted overwhelmingly in favour of a bridge near Burley Weir to celebrate Queen Victoria’s diamond jubilee.  There were further attempts in 1898, 1919 (a Peace Bridge to commemorate those who died in the First World War), 1944, 1975 and 1996.

Long story short as they say: the BBA obtained planning permission for a steel suspension bridge in 2015 and this was renewed in 2018.  It is supported in the rights of way improvement plans of both North Yorkshire County and Bradford Metropolitan Borough councils.  It was included in the Burley in Wharfedale neighbourhood development plan and adopted by Bradford Council after a village referendum in May 2018.

The group is on the last leg of the journey and is furiously fund-raising, with energy and ingenuity, organising regular events. It is planning to apply for grants as it must raise about £400,000.   It needs support for this worthwhile project and you can donate here.

This bridge will connect communities and counties.  It will bring the AONB closer to where people live.  It will enable people of all abilities to explore new areas.  It will provide a vital, safe crossing.  I wish BBA every success.

Sketch of the new bridge

I am the general secretary of the Open Spaces Society and I campaign for public access, paths and open spaces in town and country.
View all posts by campaignerkate →
This entry was posted in Access, AONB, Birds, Public paths, Walkers Are Welcome Towns, walking and tagged Bradford, Burley bridge, Burley-in-Wharfedale, Ilkley, Leeds, North Yorkshire, Otley, River Wharf. Bookmark the permalink.

1 Response to Hurly-burly over bridge