While England sweltered under the heat of the last weekend in June, I was much nearer to the Equator and yet in mist and cool weather in Lima, capital of Peru.  I am here for the biennial conference of the International Association for the Study of the Commons (IASC).

I am staying in Miraflores, on the south-west side of town, close to the Pacific, with friends from the Countryside and Community Research Institute at the University of Gloucestershire: John Powell, Chris Short and Dilshaad Bundhoo.

With Chris and Dilshaad at Huaca Pucllana

We have a pleasant flat in a quiet part of town a few blocks from the sea.  The drive from the airport in the evening was interesting; the roads were packed and there was lots of tooting and negotiating.

On Saturday Chris, Dilshaad and I explored the locality (John was unfortunately cooped up at the second of two days of IASC council meeting).

View from our balcony

The streets were fairly quiet.  Some have bike lanes.  On the main-road crossings you are told not only how many seconds you have before the crossing goes red, but also how long you must wait before it goes green again. 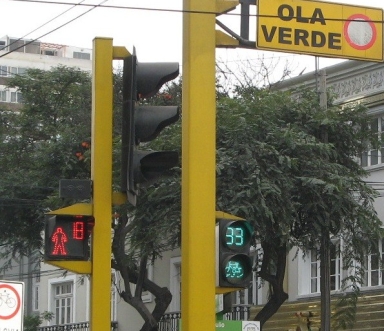 There are bikes and scooters for hire,

and it appears to be done through an app. 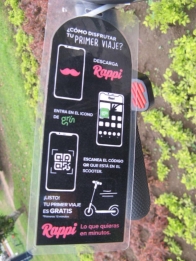 This translates roughly as ‘How to enjoy your first trip.  Download Rappi.  Enter the grin icon.  Scan the QR code, the scooter is ready.  Your first trip is free.’

There appears to be little if any public transport.  We had to rely on taxis during the week we were here.

We walked to the Kennedy Park which was buzzing with people, music and birdsong from mockingbirds and mynah-like birds.

Then we went on to the Huaca Pucllana, a ceremonial site built between 600 and 700 AD by the Lima people before the Incas.  They loved the ocean and this temple was for the worshippers of the sea, which they could see from the site.

It was a pyramid, made of rows of handmade adobe bricks, with gaps between them because the people knew that there was a risk of earthquakes in the region.

The bricks of Huaca Pucllana

Successive populations buried the pyramid and built another on top so there are layers of civilisation here.  Forty years ago it was completely neglected, a mountain where people rode motorbikes and dumped trash.  Fortunately the archaeologists discovered it and excavated it.

It was fascinating to be in an ancient place surrounded by the modern.

The stepped sides of the monument

We were given an excellent tour by Beatrice.  Then we continued to the coast, and the Faro La Marina lighthouse which was moved to this location in 1973.  Its light can be see 18 nautical miles away.

From here we walked along the clifftop path south-east with a view over the Pacific, which is marred by the roaring roads beneath.  (I went to a talk about this at the conference, so more will follow.)

As we walked through the long linear park we found a green gym, with exercise equipment.

We came to the Parque del Amor with a giant sculpture, El Beso, The Kiss (less elegant that Rodin’s) 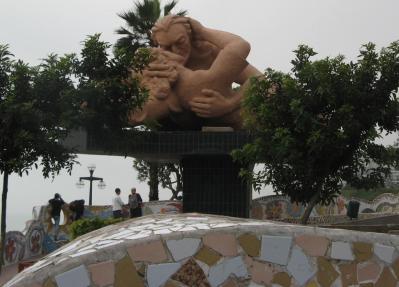 We were now close to the roads, and we crossed on a solid footbridge.

This took us to the shore, with pounding waves which were enjoyed by surfers.

We went out on to the attractive pier

and enjoyed watching the crabs on the rocks.

Then we retraced our steps to the Paddington Bear statue, designed by Stephen Fry and installed in July 2015 to celebrate UK-Peru relations.  He looks alarmingly like a Brexiteer. 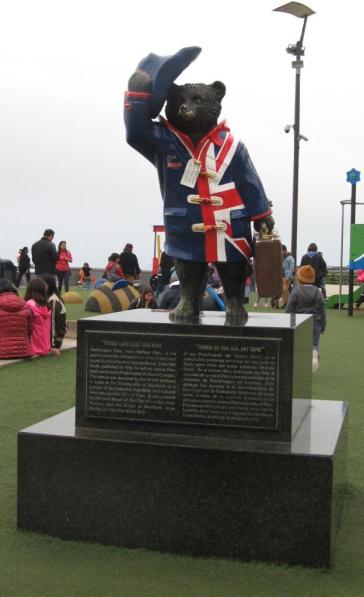 We then repaired to a restaurant where we were joined by John.  It was our only free day before the conference began, but we made good use of it and walked 13 kilometres.

I am the general secretary of the Open Spaces Society and I campaign for public access, paths and open spaces in town and country.
View all posts by campaignerkate →
This entry was posted in commons, green spaces, Peru, walking and tagged commons, IASC, Lima, Peru. Bookmark the permalink.