The draft minutes of Turville Parish Council, in the Buckinghamshire Chilterns, for 10 July 2019 record the following from the public question-and-answer session.

Question about a gate that has been put across the footpath leading up to the windmill
in Turville.  The resident does not like the design of it and feels it is not in keeping with
the area, she also finds it difficult to open and close.  Councillor Sants reported his fencing contractor had put up the gate when doing the rest of the work on Cobstones but
ultimately the gate belongs to the Wormsley Estate and as such any issues should be
addressed to them as owners. 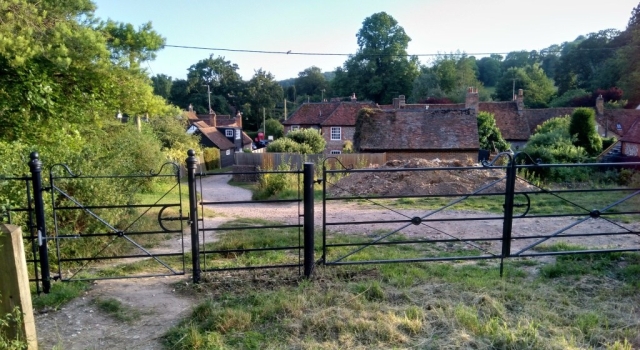 The view south to the village

Good for the resident, I say.  The gate is more suitable for an urban park than the rural Chilterns Area of Outstanding Natural Beauty.

The previous wooden structure needed renewing or just removing (as the footpath to the windmill is fenced in with no risk of stock escaping).  The refined ironwork is out of place, and impractical with its silly, fiddly catch which requires some ingenuity, and two free hands, to operate.  None of this complies with British Standard 5709 for gaps, gates and stiles—no structure is necessary here and the latch is all wrong.

I hope that the Wormsley Estate (owned by the Getty family) can be persuaded to put this right, but I am not too hopeful.  It refused to pay for a gate in a fence across the Cobstone Hill access land.  I provided it through the Chiltern Society donate-a-gate scheme, complete with sign Libertas spatiandi: libertas cogitandi (Freedom to roam: freedom to think).

I shall start by asking Buckinghamshire County Council, the highway authority, whether it has ever given consent under section 147 of the Highways Act 1980 for the structure here; if so it should revoke that consent on the grounds that the gate is not needed for agricultural use.  If consent was not given, and the gate is not mentioned on the definitive statement, it could be an obstruction which should of course be removed.

Postscript: I have reported the problem here and will track it (reference 190818986).

I am the general secretary of the Open Spaces Society and I campaign for public access, paths and open spaces in town and country.
View all posts by campaignerkate →
This entry was posted in Access, AONB, Chilterns, Public paths, Turville, walking. Bookmark the permalink.