I was heading for Round Spinney, not the well-signposted industrial estate north east of Northampton, but the wood after which it is presumably named.  This is a quiet spot, on the opposite side of the A43 road to the industrial estate, a mile south-east of Moulton.

My reason for going there was to unveil the plaque on a gate dedicated to the late Maurice Tebbutt, the long-standing, tireless and much-loved worker for Northamptonshire Ramblers.

About 40 of us gathered on the service road off the A43: Ramblers members from throughout the county as well as ‘expats’ from the Isle of Wight, John and Jenny Hague.

We walked alongside the headland 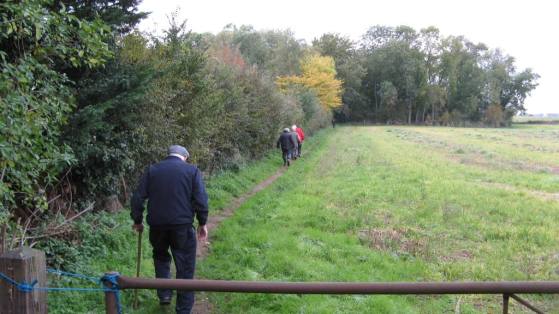 The headland route, the gate is round the corner of the wood

and soon came to the gate on the edge of Round Spinney (grid reference SP 787654).

Arriving at the gate: I am walking with 90-year-old Bob Coles, the Area president

David Craddock, former chairman of Northamptonshire Ramblers, introduced us.  I spoke of Maurice’s immense contribution, to the Area and to Northampton Group, both of which he founded.  Will Lovell, the area footpath secretary, had found evidence of Maurice’s early work in claiming paths for the Northamptonshire definitive map in the 1950s; it is thanks to Maurice and others that we have 3,000 kilometres of public paths on the current definitive map.  I recalled the many battles for paths and access in the county with which he was involved (you can read my obituary of Maurice here).

I then had the honour of unveiling the plaque on the gate. 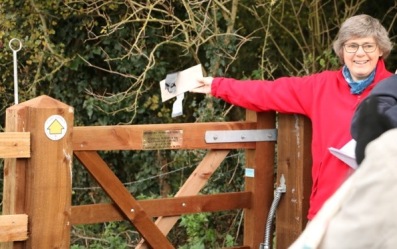 The gate had been installed by Nick Wedgbrow, Northamptonshire rights-of-way officer, and the plaque was donated by Northampton Group.  The area has launched its ‘donate a gate’ scheme in honour of Maurice, following in the footsteps of the Isle of Wight Ramblers.  This initiative will be particularly welcome in Northamptonshire where the council is so strapped for cash. 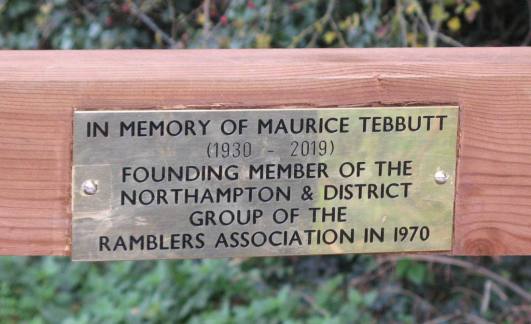 Bob Entwistle, chairman of Northampton Group, talked about Maurice’s work for the group, and Peter Storey, lay preacher from Moulton church, spoke about Maurice’s immense contribution to the community.

We gathered for a photo at the gate.  It is on a popular route, close to houses, and will be used and enjoyed by walkers from near and far.

The event had been coordinated by Roger Tyler, a long-time friend of Maurice and the Ramblers’ local footpath secretary for Moulton parish.

We went to the church hall at Moulton for a delicious tea provided by Pam Tyler.

Memorabilia
Maurice had discovered the Ramblers in 1958 through his membership of the Northampton Youth Hostels Association Rambling and Social Club.  We enjoyed a display of YHA memorabilia, as well as a collection of photographs from Maurice’s involvement in both YHA and Ramblers, all put together by Roger. 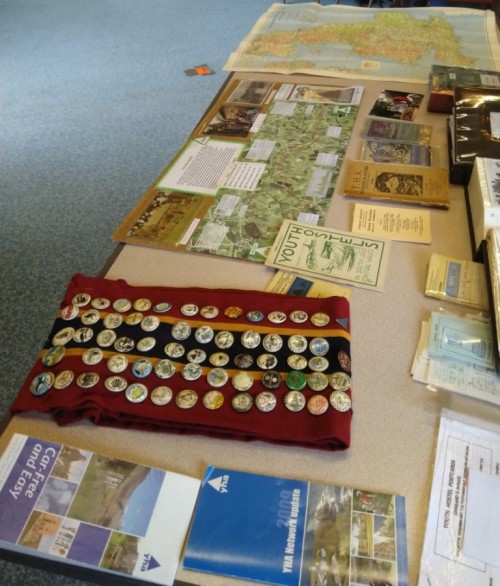 YHA badges, booklets and other memorabilia

Maurice will be remembered in Northamptonshire long after we have gone, and the gate will secure that memory.

I am the general secretary of the Open Spaces Society and I campaign for public access, paths and open spaces in town and country.
View all posts by campaignerkate →
This entry was posted in Access, campaigns, People, Public paths, Ramblers, walking and tagged Donate a gate, Maurice Tebbutt, memorial gate, Northamptonshire Ramblers, Youth Hostels Association. Bookmark the permalink.