This is the fourth and final year of the River Thame Conservation Trust (RTCT) bird survey.  I have been allotted the two-kilometre grid square SP60Q which is just to the west of Tetsworth village and the M40 in Oxfordshire.  It is not an area I know.

I have to walk for at least two hours in the grid square, taking in a range of habitats; I do this four times in all before 31 July 2020.  Unlike my other squares this one has few public paths and they are largely in the northern third of the square, making it difficult to plan a two-hour walk which is continuously within the square.  I record the results on the British Trust for Ornithology website.

I had to cross fields and the motorway to reach the start of my square.  This exercise is useful for finding path problems as well as birds.  When I turned off the track to Oxhouse Farm, to follow a bridleway across fields, there was no waymark.  I have reported it.

I followed the path to Manor Farm, over a field showing signs of ridge and furrow.  Redwings were chuntering in the hedgerow, to the backcloth of the motorway. 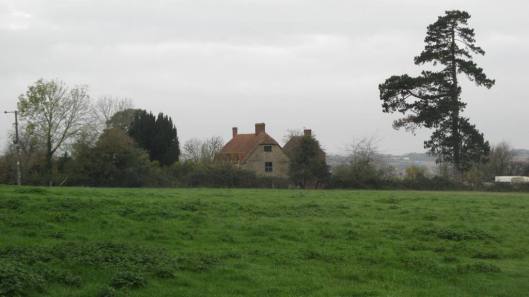 Manor Farm and Goldpits Farm are close together.  To get to them I had to climb a difficult stile—again, I have reported it.  This is at the dead end of a bridleway; the continuing footpaths need researching for historic or horse-user evidence (the latter 20 years back from the obstruction) to see if they should be recorded as bridleways (grid reference SP 677017).

Obstructive stile with Goldpits Farm behind

Manor Farm and Goldpits Farm are potentially attractive buildings but clearly need some attention.  Perhaps the motorway has sterilised them.

Then I headed south-west across the field until I came to a long hedgerow, which gave me the best birding of the morning.  There were plenty of linnets and chaffinches, bouncing along in their flocks, always that much ahead of me and impossible to count or identify.  Among them were some yellowhammers and blue tits.

A solitary tree was full of birds, with a great spotted woodpecker at the top and chaffinches on other branches.

A bit further along was the barn for Jointer’s Farm.

The view from here was wide, looking south-west towards Wittenham Clumps.  Overhead I could hear birds chattering and saw three seemingly communicating with each other, but I couldn’t identify them for sure and it was hard to judge their size against the grey sky.  Perhaps they were skylarks or redwings.

I walked past Jointer’s Farm on a track which is not marked on my Ordnance Survey map.  I had not realised how many pleasing farm buildings there are in this area. 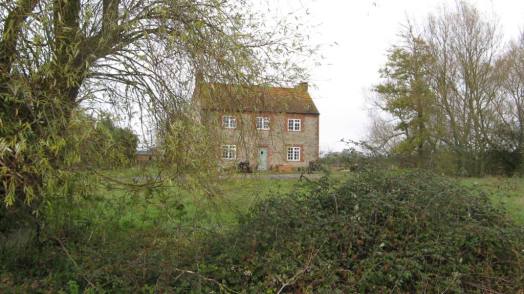 In order to take in some of the southern part of my square, I had to leave it for a spell and then re-enter it (stopping the clock), as the paths do not conveniently take me where I want to go.  I passed Latchford Farm and walked across a wet and muddy field, where the path had been marked by a tractor.  I came to a point where another dead-end bridleway joins the footpath (grid reference SP 658012).

This needs investigating, for historic evidence, or for use by riders going back 20 years from the date when the sign was posted, to see if the bridlepath continues.

I came back into my square with another long hedgerow, heading south-east.  There were not many birds but it was a pleasant walk.

I had to retrace my steps, stopping the clock again, and then took a bridleway which ran parallel to the footpath I had walked earlier.

I followed the bridleway towards the end of my grid square and then turned north-east towards Oxhouse Farm, a modern building which had been prominent on the hillside for most of my walk; it was unlike the other farm buildings I had encountered which fitted into the landscape.

In order to follow the path over the fields I had to climb a stile which was practically impossible: it leant away from me and the step was far too short. 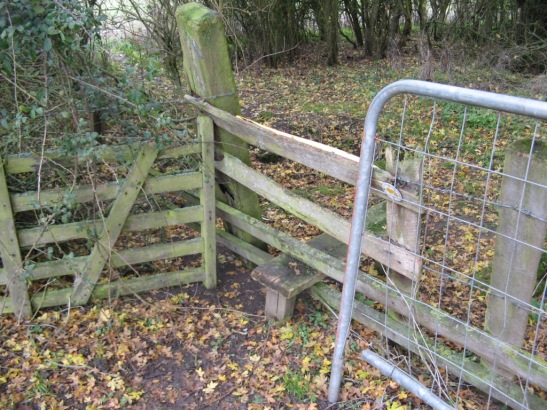 At the top of the hill there was yet another difficult stile, with sheep netting so I had nowhere to put my feet.  I have reported them both. 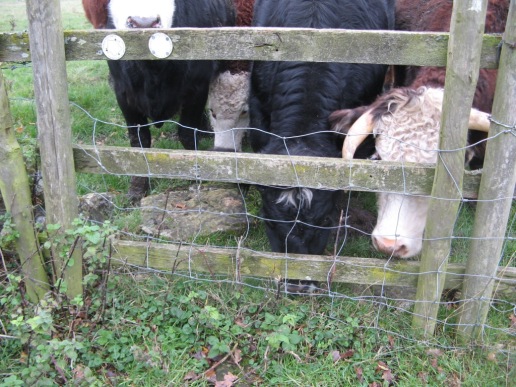 Then I went back across the motorway to Tetsworth.  I had recorded 20 bird species (excluding the mystery birds mentioned earlier) and three roe deer.

Looking south-east along the M40, Tetsworth church spire on the left

I am the general secretary of the Open Spaces Society and I campaign for public access, paths and open spaces in town and country.
View all posts by campaignerkate →
This entry was posted in Birds, British Trust for Ornithology, Obstructed path, Public paths, walking and tagged bird survey, Birds, blocked paths, River Thame Conservation Trust, stiles, Tetsworth. Bookmark the permalink.