‘How can anyone govern a nation that has two hundred and forty-six different kinds of cheese?’ asked Charles de Gaulle.

Or indeed a nation with more than 3,800 kinds of potatoes.

A few of the 3,800 potato types. Copyright International Potato Centre

That nation is Peru.  When we were at the International Association for the Study of the Commons conference in Lima we saw many varieties, particularly during the refreshment breaks.  Whereas mid morning we tend to eat biscuits with our coffee, in Peru we were offered potatoes. 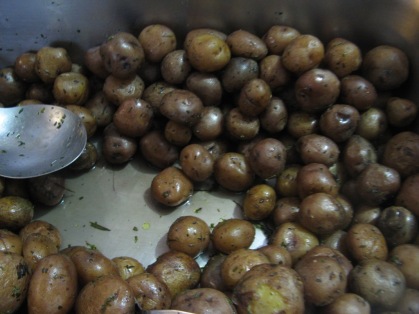 Potatoes offered at our conference

What I didn’t realise is that the International Potato Centre has its headquarters in Lima, researching science-based solutions to enable people to have better access to affordable nutritious food, and promoting the climate resilience of root and tuber agri-food resources.  This global organisation has researchers working in more than 20 countries, to establish a food-secure future.

The potato was first domesticated in southern Peru 7,000 years ago, and there is a potato park at Cusco in the Peruvian Andes where potatoes are grown at climate extremes.

It may well be that when other crops fail due to the climate crisis the humble spud will survive and feed us.