Framfield footpath 9, the notorious ‘Hoogstraten’ footpath, was illegally obstructed for 13 years, from 1989 to February 2003.  This is the story of how the Ramblers and I got it reopened.

Framfield 9 in East Sussex runs south from Palehouse Common Road, and is part of a route from Framfield village which was recorded on the Framfield Manor enclosure award of 1862.

In 1989 a local member of the Ramblers saw a barn being built over the path and was accosted by a contractor on the estate who told him to use another route. He reported this repeatedly to East Sussex County Council (ESCC), the highway authority, over the years but nothing was done. ESCC, which was concerned that its staff might be at risk, and the police appeared to be intimidated by the landowner, property tycoon Nicholas van Hoogstraten.

Subsequently padlocked gates were erected across the path and container-sized refrigeration units were placed there.

High profile
In 1998 the Ramblers’ central office took on the campaign, and at the same time Hoogstraten broadcast his obnoxious remarks about ramblers, calling them ‘riff raff’ and ‘scum of the earth’, so the campaign acquired a high profile.  In January 1999 the Ramblers’ president Andrew Bennett MP led a walk along the blocked path accompanied by the police.  The following day, a six-stranded barbed-wire fence was erected where the path joins the road. 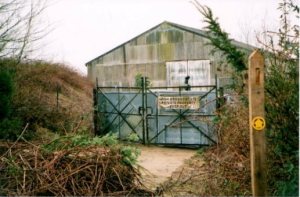 Publicity and pressure on the council having failed, the Ramblers began legal action in the magistrates’ court, for obstruction of the path under section 137 of the Highways Act 1980.  It was complicated by a change in landownership from Nicholas van Hoogstraten to a shadow company, Rarebargain Ltd, which delayed matters.  Eventually the case came to Lewes magistrates’ court in January 2000 where I appeared as a witness for the Ramblers.  Rarebargain was found guilty of obstruction and was fined £1,600 and ordered to pay the Ramblers’ costs of £3,500.

The obstructions were not removed and the fines and costs were not paid.

Diversion
In March 2000, after much pressure from the Ramblers, ESCC served notices on Rarebargain ordering removal of the obstructions within 90 days, under section 143 of the Highways Act 1980.  However, shamefully, it also said that if Rarebargain came up with a suitable diversion, it would put the notices on hold.

Encouraged by this, Rarebargain did come up with a diversion route, avoiding the obstructions.  This was published for consultation in July 2000 and received 5,000 objections (because of course we encouraged members of the Ramblers and the Open Spaces Society to object).

This number of objections must be unprecedented for a diversion consultation and it was contrary to ESCC’s policy on processing public path orders which said that an application would only be dealt with when the definitive line of the right of way was open, signed, clear and safe to use and the removal of any obstruction was not reasonably achievable.

ESCC ignored the objections and its policy and published a formal diversion order.  This attracted 2,000 objections, again surely unprecedented, yet ESCC ploughed on and sent the order to the Planning Inspectorate in June 2001, to be determined by a public inquiry.

Hoogstraten clause
Meanwhile, during 2000 the Countryside and Rights of Way (CROW) Act was going through parliament. Because of the high profile of the Framfield case with Hoogstraten’s fulminations against ramblers, and the fact that an ordinary prosecution in the magistrates’ court had failed to remove the obstructions, the Ramblers pressed for a clause which would require obstructions in such cases to be removed.  When the clause was discussed in both the commons and the lords, members referred to Hoogstraten. Clearly the clause was designed to deal with cases such as his.

The clause became section 64 of the CROW Act and was inserted into the Highways Act 1980 as section 137ZA.  It gives magistrates the power, when finding someone guilty of obstructing a highway, to order the removal of the obstructions by a certain date.  If the obstructions are not removed, a further offence is committed with a maximum fine of £5,000.  Thereafter there is a fine for every day the obstruction remains, to a maximum £250 a day.  (These were the rates in 2000.)

The section came into force on 30 January 2001.  I wanted to be the first to test it and on 1 February 2001 I returned to Framfield.  All the obstructions were still in place so I served notice of them, under section 137 of the Highways Act, that day at Lewes magistrates’ court.

Fines
The case was heard on 20 March 2001.  Rarebargain did not appear.  I was represented by Ramblers’ solicitor Jerry Pearlman.  Rarebargain was found guilty of obstruction on all four counts (barbed-wire fence, padlocked gates, refrigeration units and barn) under section 137 of the Highways Act 1980 and was fined the maximum of £1,000 for each.  Under the new CROW Act provision, the magistrates ordered the fence, gates and fridges to be removed within 28 days and the barn within six months.

After the 28 days I returned and all the structures were still in place. So I was back in the magistrates’ court on 3 July and the magistrates fined Rarebargain the maximum of £5,000 each for the three obstructions which had not been removed within 28 days.

I returned in September after the six months for the barn had expired.  It was still there so I went back to court and, on 29 November, the magistrates fined Rarebargain £5,000 for failure to remove the barn plus the maximum daily fine for the other three obstructions (£250 per day per obstruction for 81 days, total £60,750). They ordered Rarebargain to pay my costs of £3,400.

I could have continued to return to the magistrates’ court for more daily fines, but this would have served no useful purpose if Rarebargain did not pay. By now it owed £93,250.  In any case, it had no assets, being merely a paper company.  The magistrates did make some attempt to recover the money but without success.  Also, I feared the magistrates might get annoyed with me reappearing on something which might be thought a technicality, so I stopped while I was winning.

The 2004 act
The problem was that companies could get away without paying fines. As a result of this case, the government drafted a bill which Michael Foster, Labour MP for Hastings and Rye, adopted when he came 16th in the private member’ ballot in 2003.  His Highways (Obstruction by Body Corporate) Act 2004 ensures that, when a corporate body is fined under section 137 or 137ZA of the Highways Act 1980, the fines can be collected from a director, manager, secretary or similar officer.  In future, companies like Rarebargain would be required to pay.

Back to Framfield, and in September 2001, with the diversion order now before the Planning Inspectorate, I lodged a judicial review against ESCC for failure to take action against the obstructions.  In view of this the Treasury Solicitor agreed to put the diversion order on hold (thanks to Sophia Lambert, Director of Wildlife and Countryside at the Department for Environment, Food and Rural Affairs, who asked for this to happen).  This was important because the diversion order might have been confirmed before my judicial review concluded its passage through the courts.

My argument was that ESCC had acted unlawfully in failing to remove the obstructions.  ESCC seemed to think that because the path was obstructed by a barn, it was reasonable to seek a diversion around it.  However, I argued that the magistrates had ordered the removal of the barn and therefore they considered it could be moved.

High court
The hearing in the high court was on 11 March 2002.  I was represented by barrister David Wolfe.  The judge was Mr Justice Grigson.  I lost the case, but unusually the judge himself gave me leave to appeal and did not order that I pay ESCC’s costs.

I appealed to the court of appeal.  The case was heard on 14 October.  I was represented there by George Laurence QC and David Wolfe, and my solicitors were Jerry Pearlman and Naeem Siraj.  My legal team was fantastic, I was extremely fortunate.

George Laurence presented a number of arguments, but the principal one was that the council had failed to follow its own guidelines and had processed a diversion for an obstructed path when the removal of the obstructions ‘was reasonably achievable’.  He argued that the court should quash the council’s decision to submit the contested diversion order to the Secretary of State.

Judgment
The court (Lord Justice Schiemann, Lady Justice Arden and Lord Justice Dyson) agreed and in their judgment of 20 November 2002 upheld the appeal and quashed the council’s decision.  They considered that the path had been deliberately obstructed and consideration should have been given to that fact by the council, as well as the fact that the magistrates had ordered removal of the obstructions.  The council was ordered to pay my costs.  The judgment contains much quotable material which can be used when fighting path-blocking landowners and weak councils.

ESCC therefore had to reconsider its decision to submit the contested diversion order to the Secretary of State. However, it was let off the hook because by now the land had changed hands, Rarebargain having gone into liquidation.  The liquidator told ESCC that he did not wish to proceed with the diversion order.  At the end of January 2003 ESCC served a legal notice, under section 143 of the Highways Act 1980, on the liquidator for removal of the obstructions. The liquidator did proceed and on 10 February 2003 we had a celebratory event at Framfield, to cut the wire and the padlock before the machinery moved in to clear the site. 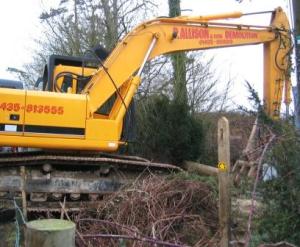 The demolition squad moves in

Message
The case cost the council over £100,000. Obviously if the council had seen through its original notices in 2001 instead of processing the diversion, the path would have been cleared much sooner at a fraction of the cost.

The message from the court was clear.  Highway authorities are expected to carry out their statutory duties to reopen paths instead of seeking diversions around the obstructions.  It should not be left to members of the public to do the job of highway authorities. 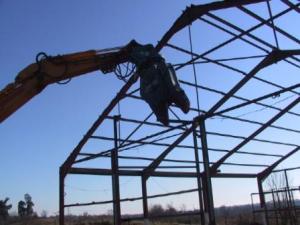 The barn comes down

For an excellent nine-mile walk from Uckfield which takes in the path, see here.